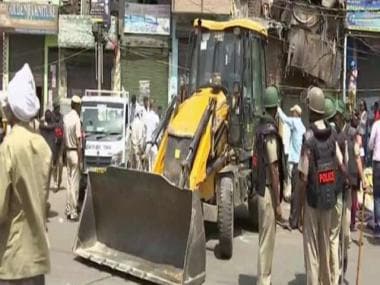 The legality of demolitions recently carried out by the Uttar Pradesh government against illegal encroachments soon after violence broke out in several parts of the state was heavily questioned on the grounds that it violated the requirements of due process. Gautam Bhatia has insinuated that the demolition exercise was an act of ‘collective punishment’ in which the State first identifies certain individuals as the perpetrators of violence and then declares post hoc that these individuals are occupants of unauthorised buildings to justify the demolitions.

He contends that there is a doctrinal gap in our constitutional jurisprudence that could provide a proper remedy against this form of ‘collective punishment’, and he employs the doctrine of ‘Unconstitutional State of Affairs’ (USoA), which has its roots in Colombian constitutional law, to fill this gap in order to hold the executive accountable.

His entire argument about USoA, in my opinion, is based on a fundamental misunderstanding, perhaps a deliberate misreading, of the doctrine’s evolution and scope. Before I point out the obvious mistakes in the argument, it is important to understand the scope of the doctrine.

The doctrine of USoA was developed by the Colombian Constitutional Court to review ‘protracted legislative and executive omissions’ in addressing ‘massive and generalised’ violations of minimum constitutional protections guaranteed to citizens in the form of individual and social rights. It derives its strength from the minimum core doctrine which empowers the court to interfere in matters of public administration and determine the “minimum amount and quality of goods and services that political authorities should deliver to the individuals”.

At the centre of judicial declaration of an unconstitutional state of affairs is the identification of a ‘massive, protracted and reiterative social problem’ that ‘demands the adoption of a complex and coordinated set of actions’ through collaboration between the responsible state actors for achieving a meaningful realization of the social and economic rights.

Notably, all cases in which the Court invoked this doctrine concerned the enforcement of the state’s ‘positive obligation’ in the progressive realisation of economic and social rights. In other words, the doctrine was invoked to address the yawning gaps between the positive duty of the State in the effective enjoyment of economic and social rights and the availability of conditions and resources which would advance their realisation. When this happens, the Court requires the state to adjust its activities in a way that harmonises the relationship between its positive constitutional or legal obligations in respect of economic and social rights and the administrative and financial capacity necessary for the effective realization of those rights.

On a review of the cases on USoA, it is not very difficult to see that the doctrine has emerged in response to the objectives of the Colombian Social State, which the Colombian Constitutional Court describes in the following terms: “The historic origins of this model and its developments, confirm that unless the real limitations and inequalities faced by man in everyday life are effectively countered through positive and focalized actions by the authorities, human freedom and equality shall not cease to be abstract utopias. …Authorities are bound—through the means that they consider appropriate—to correct the visible social inequalities, to facilitate the inclusion and participation of the weak, marginalised and vulnerable sectors or the population in the economic and social life of the nation, and to stimulate a progressive improvement of the material living conditions of the most disadvantaged sectors of society.”

From the above discussion, it is clear that the USoA doctrine purports to review the performance of Colombian public policies implicating economic and social rights through invasive interventions and prescribe detailed structural remedies to overcome the political inertia. The thrust of its application thus lies in nudging the State to fulfill its positive duties by taking meaningful steps in that direction.

However, Bhatia invokes the doctrine in a completely different context and situation. It is nobody’s case that demolitions either in Uttar Pradesh or any other State violate the positive duty of the State to ensure the fulfillment of the economic and social rights of the citizens. Indeed, setting up such a case would be very absurd and fantastic, and if that position were to be accepted, it would be tantamount to saying that the State must allow unauthorised structures to continue without initiating any action against those who continue to illegally occupy them. Such an assumption would also fail under the ‘direct and inevitable’ effect test developed in the Maneka Gandhi’s Case for adjudging state action for fundamental rights violation.

Nothing about the demolition exercise prevents or interferes with the right of any person to purchase, build, or hold any property if it complies with the local municipal laws. On this premise, it is unclear how the USoA doctrine can be applied to resolve mundane cases involving a due process challenge mounted against State action, which relates to the State’s negative duty not to deprive any person of his or her property without following due process of law. As such, no positive aspect of the State’s duty to ensure an environment that gradually achieves economic and social rights for its citizens is implicated. These are important points of departure from the Colombian Cases which render the USoA doctrine completely inapplicable to the demolition exercise. The cause of action in the demolition exercise is completely different, and only by ignoring the origins and evolution of USoA doctrine can readers be led to believe that it will help resolve the controversy.

Lastly, on the basis of several suppositions and conjectures regarding the existence of an unconstitutional state of affairs, Bhatia gives readers a glimpse into his remedies for dealing with the situation. He recommends the issuance of a continuing mandamus which will allow the Supreme Court to constantly monitor the demolition exercise. In practice, this oversight mechanism would effectively transform the Supreme Court into an Office of Municipal Commissioner/District Magistrate, who is the competent authority under municipal laws for their administration.

For this innocent suggestion, I have some simple questions which have not been answered by him: Whether it is feasible for the Supreme Court to regularly monitor compliance of its orders on demolitions when it has itself struggled and grappled with structural issues for decades, which includes the problem of an overflowing docket? For a problem that Bhatia himself alleges to be so protracted and massive that it has become an ‘unconstitutional state of affairs’, isn’t the remedy fundamentally problematic? Where will the Supreme Court muster the ‘will and desire’ to properly execute this remedy? Will it be scrutinising Master Plans to ascertain if a demolition notice is valid or not? Quite amusing to think so.

These questions directly take me to the more fundamental objection I have to the cross-constitutional exploration undertaken by Bhatia. In this regard, I support the exception taken by Thiago Luís Santos Sombra to the adoption of USoA doctrine by the Brazilian Supreme Court. He questions the necessity and efficacy of the Brazilian Supreme Court implementing a method of judicial review that is completely foreign to its cultural model. Given that USoA doctrine requires a constant oversight mechanism, which is quite costly, he expressed serious doubts regarding the chances of the doctrine’s real success in Brazil.

For India too, there is no doubt that USoA doctrine would not succeed. The barrage of interlocutory applications filed in the MC Mehta Case shows how constant supervision of the Supreme Court has never served any good purpose. There is no need for India to undergo another experience like MC Mehta, especially for a routine and regular phenomenon like unauthorised constructions.

In addition to the above, the invasive nature of the USoA doctrine would also bring it in direct conflict with Part IX of the Constitution. Bhatia’s suggestion that judicial sanction must be mandatory in all cases of demolition will impact the functions and duties of municipal bodies as institutions of local self-governance. Under almost all municipal laws, they are vested with the power of regulating illegal and unauthorized structures. A prior judicial sanction in every case is onerous and places a disproportionate burden on the municipal bodies to prove its case to a judicial officer even before it proceeds to issue notice to an occupant of an illegal building. The requirement of notice is a sufficient safeguard against arbitrary action. There is no need for a judicial fiat to insert additional conditions when the field is already occupied by a legislation.

As a concluding point, I must state that Bhatia makes numerous factual assumptions in his article to advocate for the blind adoption of the USoA doctrine in the Indian context. Even with those wild assumptions, the doctrine has no application. While his journey may seem fascinating to unwitting law students, I would advise them to read about the Ockham’s razor principle before embarking on a fruitless journey across the Pacific. I sincerely hope we are spared such constitutional comedy in the future.

The writer is a Supreme Court Advocate. Views expressed are personal.