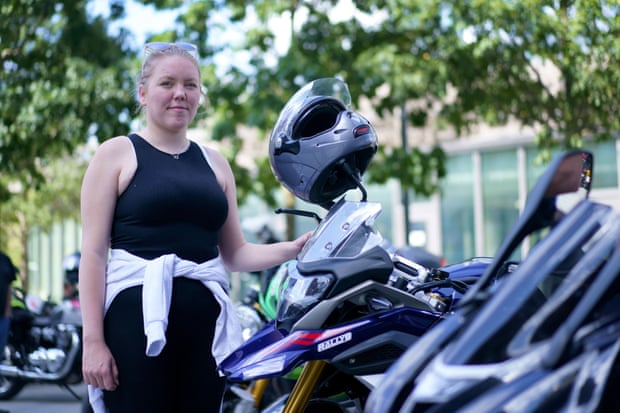 A gaggle of motorcyclists gathered outdoors the US embassy in London to carry a “rev-off” and say prayers on the third anniversary of the dying of fellow motorcyclist Harry Dunn.

The 19-year-old was killed in a collision with a automotive outdoors the US navy base RAF Croughton in Northamptonshire.

The suspect had diplomatic immunity asserted on her behalf by the US authorities after the collision, and was capable of go away the UK 19 days after the incident, sparking a diplomatic dispute.

At Saturday’s occasion in London, organiser Steven Baird turned in direction of the US embassy and informed the neighborhood of bikers who had gathered in entrance of it: “Individuals who come to our nation ought to obey our legal guidelines. They can’t and mustn’t get out of our nation whereas disobeying our legal guidelines.”

She mentioned: “My deepest sympathies are with Harry’s household on the anniversary of his tragic dying.

“I wish to pay tribute to their unbelievable resolve. We are going to proceed to assist them of their seek for justice.”

A good friend of Harry Dunn’s, Chelsea Wilson, 24, mentioned she was glad to be amongst these marking {the teenager}’s anniversary to assist guarantee Harry is “not forgotten”.

“You will need to simply bear in mind him,” she mentioned. “We have to preserve the momentum up. We’re not going to go away. We’re very a lot nonetheless right here and supporting the trigger.”

Sacoolas was as a result of seem at Westminster magistrates courtroom in London in January.

Nonetheless, days earlier than her look, the Crown Prosecution Service mentioned the listening to had been vacated to allow ongoing discussions between the CPS and Sacoolas’s authorized representatives to proceed.

Dunn’s household are marking the third anniversary of his dying in personal.

Household spokesperson Radd Seiger mentioned: “It’s a terribly unhappy day however no sadder than some other day that his household must endure.

“All of us miss him terribly. He was a large of a person with a fair larger and hotter persona who cared a lot about others.”