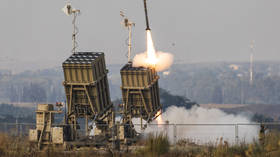 Greek air protection programs positioned a radar lock on Turkish plane that had been flying a reconnaissance mission, in a transfer that NATO guidelines describe as “a hostile act,” CNN Turk reported on Sunday citing its sources within the Turkish protection ministry.

In line with the outlet, Turkish F-16 jets had been conducting an operation within the Aegean Sea and Japanese Mediterranean in worldwide airspace on August 23 after they had been locked-on by a Russian-made S-300 air protection advanced stationed on the island of Crete. The Turkish jets apparently picked up that they had been within the crosshairs of a weapon as they flew at an altitude of three,000 meters and to the west of the island of Rhodes.

Greek media denounced the Turkish mission as “provocation,” arguing that Ankara was making an attempt to disclose the S-300 place on Crete.

Whereas the plane accomplished their mission and returned safely to their bases, such actions are thought-about “hostile” below NATO guidelines of engagement, CNN Turk famous. It described the incident as “incompatible with the spirit of the alliance,” provided that each Turkey and Greece are members of the army alliance.


The most recent allegation comes after Greek F-16 jets “harassed” Turkish planes in the identical area on Thursday by locking their radars on the targets, in keeping with reviews. The same incident reportedly occurred over the Japanese Mediterranean on Tuesday, with the Greek army attaché being summoned to the Turkish Ministry of Nationwide Protection.

“Greece continues to persistently goal NATO missions to extend tensions,” and the most recent incident proved that Athens had deliberate the transfer prematurely, Each day Sabah’s sources within the ministry claimed on the time.

Turkey and Greece have been balancing getting ready to battle since 1996 over two islands within the Japanese Mediterranean, in addition to over maritime frontiers and deposits of treasured sources like oil and gasoline. One other level of competition is migration, with Greece accusing Ankara of “making use” of refugees, who attempt to get into Europe through the Greece-Turkey border.